Profile:
I began sailing Optimists aged 8, then progressed through the RYA Junior and Youth system in Oppies, 420s and 29ers before sailing a 49er for 18 months or so. When I decided professional sailing wasn't for me I bought an RS800 and have raced it ever since. I also do lots of other sailing including RS200s, team racing and some yacht sailing. This year was my 6th Nationals, so it was nice to finally win, although a huge amount of credit needs to go to my new crew Fiona Hampshire!

Tips:
Communication! The more you talk as a pair the easier it gets. Bouncing ideas off each other is really useful! Whether it's about rig set-up, or tactics. It's especially important for boat-handling when it's windy.

Profile:
I started sailing aged 6 in an optimist at British Steel Sailing Club in South Wales, with a walkie talkie strapped to the bulkhead so my dad could relay instructions from the shore! Mirrors and 420 youth squad and then Lasers followed. I went to 5 laser Europeans and 3 World Championships, and coached the Optimist and Laser national squads in the off season. I've sailed 800's since 2002 when I decided that hiking out was a bad idea. A 5 year break from sailing ended in 2010 when Toby tempted me back into the 800.


Tips:
Communication, communication! Constant chat between helm and crew, if either are not getting the information they need, they should be asking questions to get it. The course, pressure, other boats, angles, and modes. This is how Toby and I cope in the absence of any training!
James Date: helm
Toby Wincer: crew 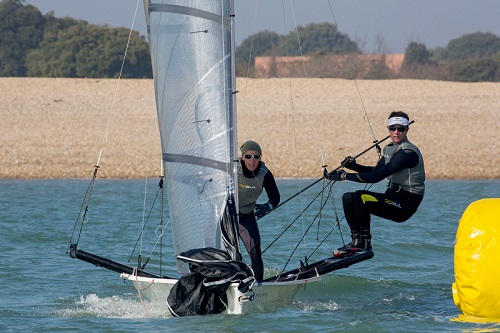 Emma started sailing in a Mirror with her Dad before racing Toppers and 420s.
Luke’s sailing began when his family moved to Lymington – first helming Cadets then crewing in a 470.
We met at university and went team racing together; that's really good for learning the rules, close quarters manoeuvring and how to sail with a hangover…
After uni we sailed a Laser 4000 for four years when it still had a fantastic UK and European circuit.
We then had a sabbatical from dinghy racing while we went yacht cruising for five years.
Once back home, we quickly realised we needed to get an adrenalin fix again; fortunately some friends lent us their RS800.  A few capsizes later we were hooked!  Weight equalised racing in a twin wire skiff that doesn't require a degree in boat handling, combined with a friendly social scene; it was everything we wanted.  It has been a challenging learning curve; at our first nationals we were mid fleet but found the faster sailors were always happy to give advice, and five years later we found ourselves at the front.


- Practice boat handling on flat water and don't worry when it gets tricky in chop; everyone’s in the same situation.
- The RS800 is gloriously forgiving downwind but upwind Luke the helm needs to focus on steering, so Emma as crew doing tactics on the beat makes a big difference for us.
- Club racing is good practice, particularly for those tricky two-sail reaches.
- Keep fit to avoid injury and so you can enjoy the last race of the day.
- Don't take it too seriously: the RS800 events are about having fun on and off the water.
- Race an RS800 at Garda at least once in your life!


Roger Phillips and Will Crocker

Profile:
I was initially dubious about getting an 800, and Will definitely pushed me into it saying “it’ll be just like the 29er” – these suspicions were only re-enforced when on the first time we launched, I had fallen through the main before we even tacked. My trapezing has got better since then, but some would say only marginally!

Tips:
3 top tips?
Never give up, the crew is the tactician and read ‘Fast Handling Techniques’ by Bethwaite (ch 14 if you can’t face the whole book).

Profile:
I started sailing as a young child at Ullswater Yacht Club in Toppers
Developed through the Topper national squad from the age of 12, through youth squads (29er) then into ODS squad (49ers)
Moved into RS800's when I started working for RS in 2006
Finally won the nationals in 2011 after 3 consecutive 2nd places

Tips:
Quality time on the water, with other boats if possible
Teamwork with your helm/crew